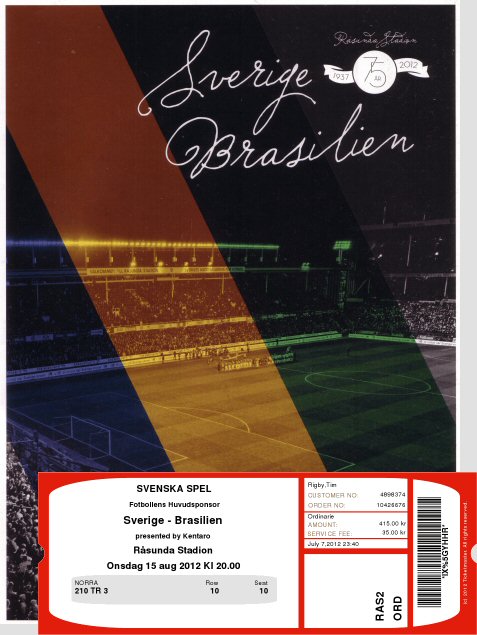 Whilst England might be considered the home of football, it’s true to say the homes of football in England aren’t quite what they used to be, with bland, modern, out of town arenas replacing the traditional terraces that were once situated in the heart of the community and helped make the game so special to the nation. Partly down to that, since having completed the 92 in 2007, I’ve somewhat lost the bug a little bit for visiting new grounds in this country, but looking further afield there are many throughout Europe that attract the eye, and none less than the Rasunda Stadion in Stockholm, Sweden, home of not just the national team, but AIK as well, one of Sweden’s top clubs.

The ground is most famous for having hosted the 1958 World Cup Final between the host nation and Brazil, a match that the Brazilians would go on to win, with a certain Edson Arantes do Nascimento making his bow on the world stage, alas though, like across the North Sea in England, the wheels of change are in full motion over  in Sweden as well, and with the Swedish FA having commissioned a new national stadium, then Rasunda’s days are coming to an end and in honour of its most famous match, Brazil had agreed to play the final international fixture there to send it off.

For some time I’d wanted to visit the ground, so with my hand forced, I’d pencilled this game in, booking the trip late in June as an early season gem on the groundhopping schedule to look forward to.

Setting off from Heathrow, the flight to Stockholm went fairly well, and after arriving in the country it didn’t take long to experience the notorious high cost of living in Sweden, with a return ticket on the ‘Arlanda Express’ train from the airport to the city a mere £45 for a 20 minute journey! I chose the coach option at a relative bargain of £20, never again to complain about train prices in the UK!

High prices aside, after arriving in the city and bumping into the Brazil fans already in full carnival mood, dancing their way down the main shopping street to the accompaniment of a samba band then there was a treat in store practically adjacent to my hotel on Sturegatan, with the 1912 Olympic Stadium still preserved and open to the public to walk around. A fantastic stadium, this is, or was the home of AIK’s cross city rivals Djurgadens who like their neighbours are also moving out to a new modern arena, but unlike Rasunda, this ground will be preserved and continue to host athletics and music events, if not football. More can be seen here about it... Having arrived though, and checked into the hotel, then I mainly spent the afternoon exploring the city, uncharacteristically trying to avoid the bars, with half a pint of lager typically priced at between £5-6!

Everybody I’d met beforehand who had been here had advised how nice it was, and on a sunny August day walking around the coast you can certainly understand Stockholm’s reputation as one of Europe’s most beautiful capital cities, the water in particular breathtakingly clear as you look out over it to the wooded islands and shores that make up the city. With time getting on though, the sightseeing would have to be put on hold until the next day as it was time to head off inland and to the game.

Stockholm’s Tunnelbana system connects the city, much like London’s underground, albeit the stations here are carved out into the underground rock giving more the feel of entering a cave than a high speed public transport system. The stop for Rasunda is right outside the ground, and the journey to the stadium was made along with thousands of fans decked out in the national colours of yellow and blue, many wearing the name of their nations star striker on their back with Zlatan Ibrahimovic making Beckham 7 look shunned in comparison.

Situated in Solna, a northern suburb of the city, football has been played on the Rasunda site since 1910, including in the 1912 Olympics (albeit not the final that Great Britain won), but the current ground dates back to 1937, when it was opened with a 40,000 capacity. England were the first opponents for the Swedes, with Stoke City’s Freddie Steele grabbing a first half hat-trick in a 4-0 win for the visitors, the following match proving to be more to the hosts fortune with them returning the 4-0 scoreline, this time against Finland.

Whilst three sides have been rebuilt since that time, the ground is still largely recognisable, notable on the continent for the proximity of the stands to the pitch, making for an intimidating atmosphere for the players. Originally there were double decker stands on all four sides, with only the East Stand covered, but the West Stand was rebuilt in the 1980s, with the two end stands having a third tier added in the mid-90s, just in time for another historic game to be held at the stadium when Chelsea beat Stuttgart 1-0 to lift the European Cup Winners Cup trophy courtesy of Gianfranco Zola’s solo goal. This rebuilding programme somewhat helps explain the modern exterior of the ground that has a simple, yet effective concrete and glass design, which includes large external stairwells up to the third tier where my seat was situated.

With the atmosphere around the ground building, I made my way in, disappointed to hear the news that Ibrahimovic would be missing due to a foot injury. The Swedish team are going through a time of transition at present, with Zlatan being the last in the line of a number of greats like Henrik Larsson and Freddie Ljungberg, Sunderland’s Seb Larsson probably being best known to English supporters from the current squad for tonight’s game, and when the game got underway it somewhat showed as the Brazilian side, featuring names like Oscar, Thiaga Silva, Ramires and David Luiz took control of the game, limiting the hosts to half chances on the break, the pacy Christian Wilhelmsson causing most problems for the visitors. Despite their dominance, it took Brazil until the 32nd minute to break a rigid Swedish defence, and it was frustration for the home fans as their team made their first real mistake of the game, after Leandro Damiao ghosted into the box unmarked to head home a cross from the left to make it 1-0.

The second half was much of the same as the hosts continued to try and contain their visitors and the game somewhat petered out until the 83rd minute when Brazil made it 2-0, albeit with a hint of controversy as Pato looked offside when he headed home Daniel Alves’ chip over the ‘keeper, and with the fans still complaining at that he enraged them even further two minutes later when he went down fairly easily following Pontus Wernbloom’s clumsy challenge inside the box, Pato taking the penalty himself for 3-0.

It was a harsh scoreline for Sweden, albeit they could have no complaints at the loss, with the side looking unlikely to score at any point in the game, so a somewhat disappointing result to end the grounds history on.

After the final whistle, I headed back into the city easily, the Tunnelbana running efficiently enough and spent the next few days around Stockholm glad to have made the decision to come to the ground, which will be a loss to the game, and one worth going to for the remaining AIK matches still to be played there before it’s finally demolished. 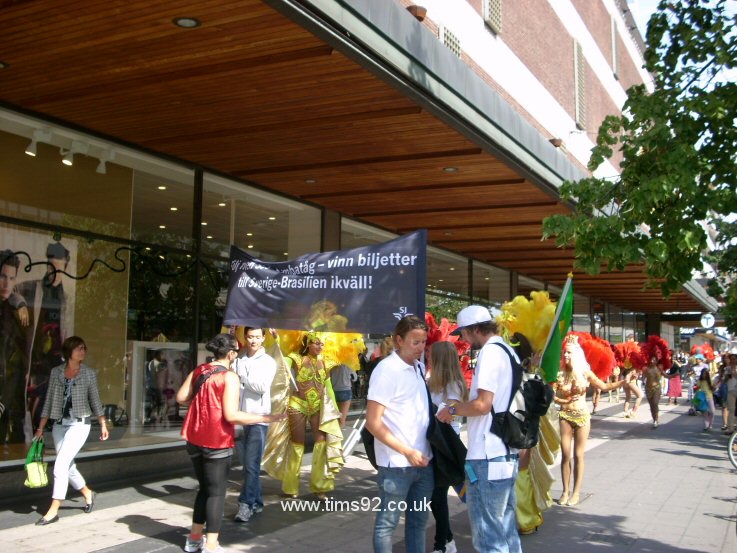 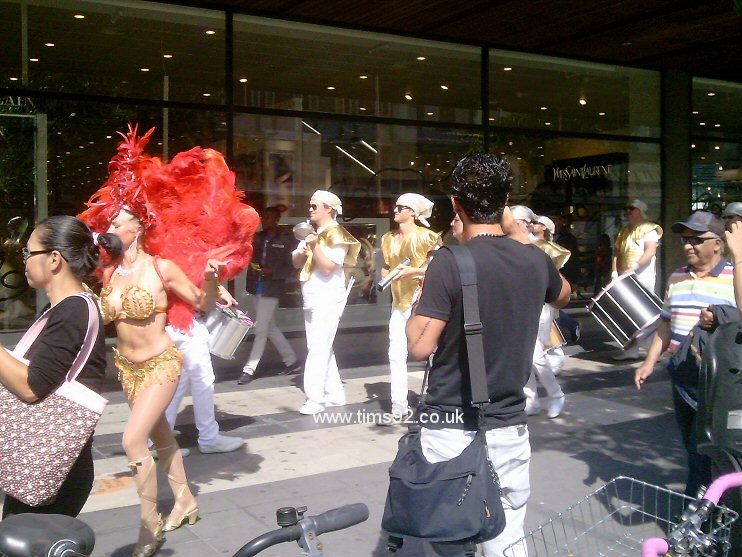 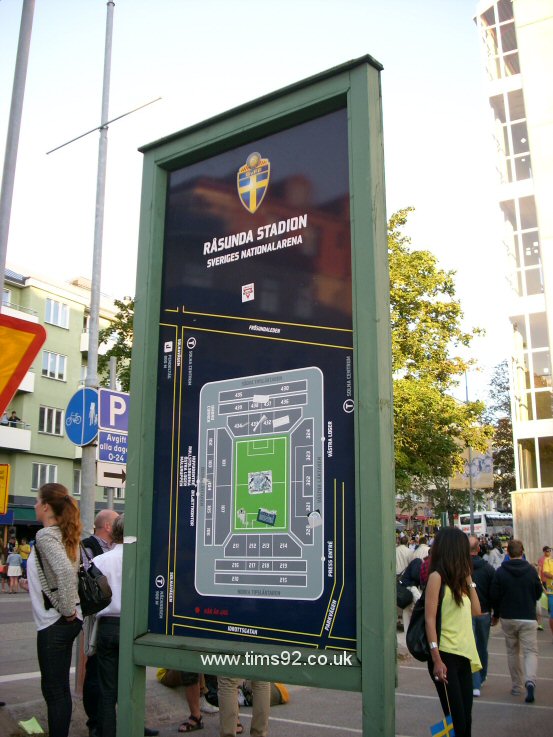 Welcome to the Rasunda Stadion 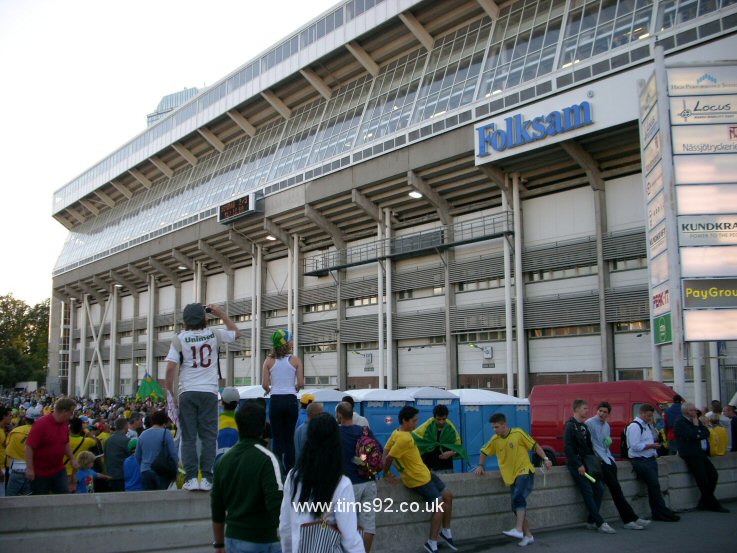 Rear of the South Stand 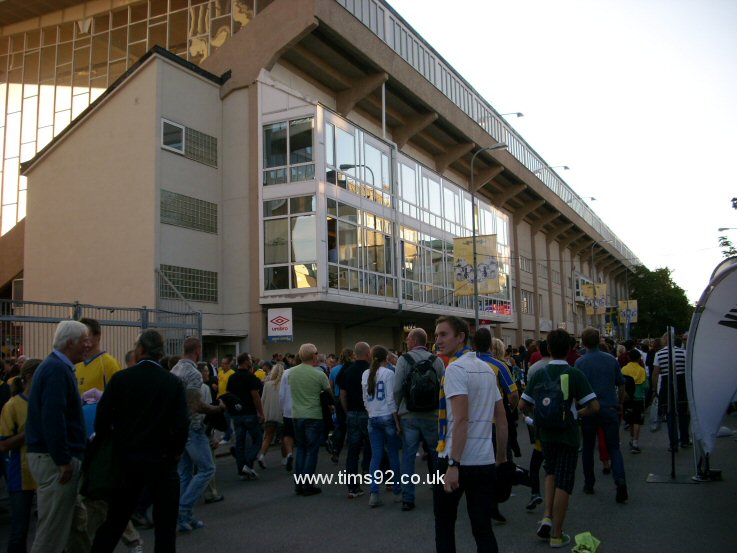 Rear of the East Stand 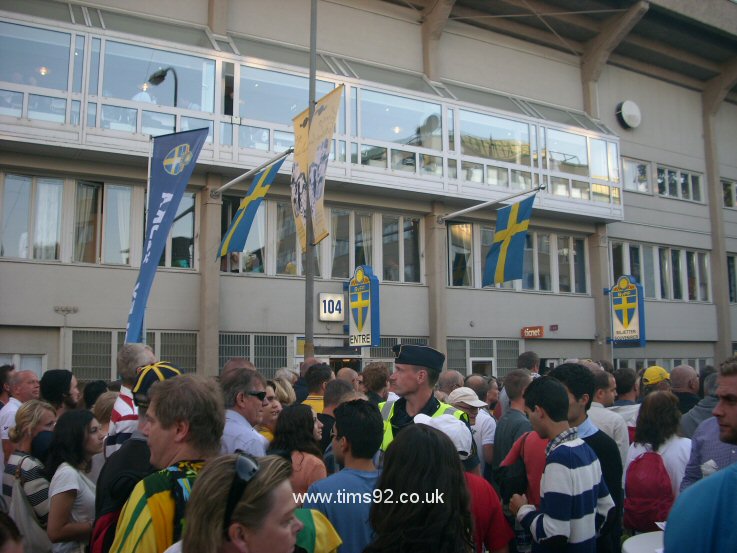 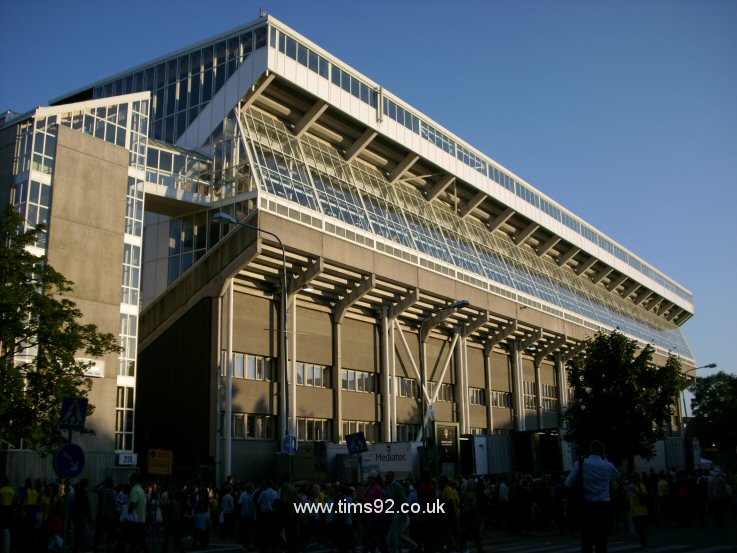 Rear of the North Stand 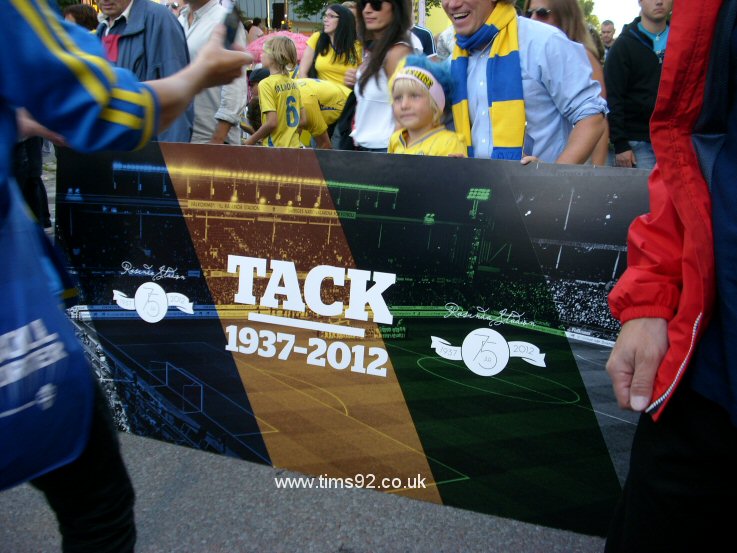 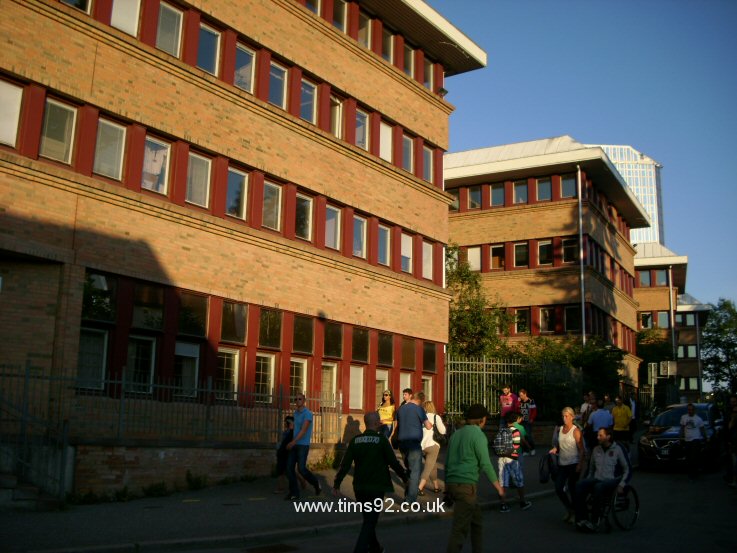 Rear of the West Stand 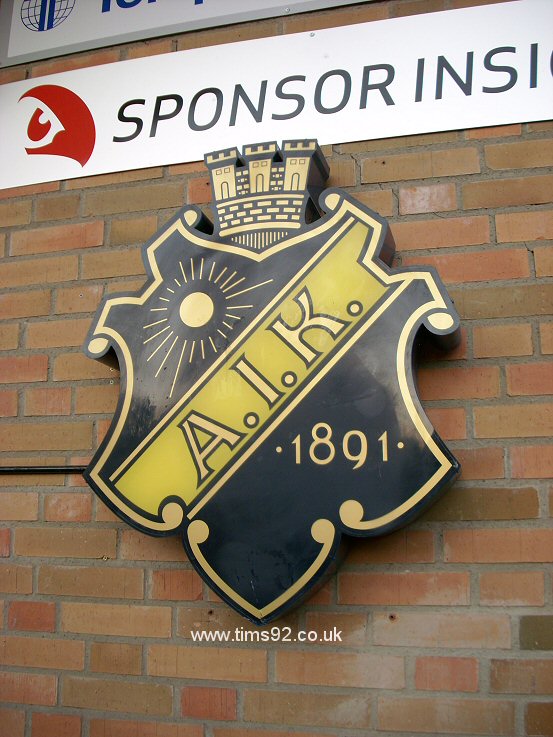 AIK - The main tenants of Rasunda 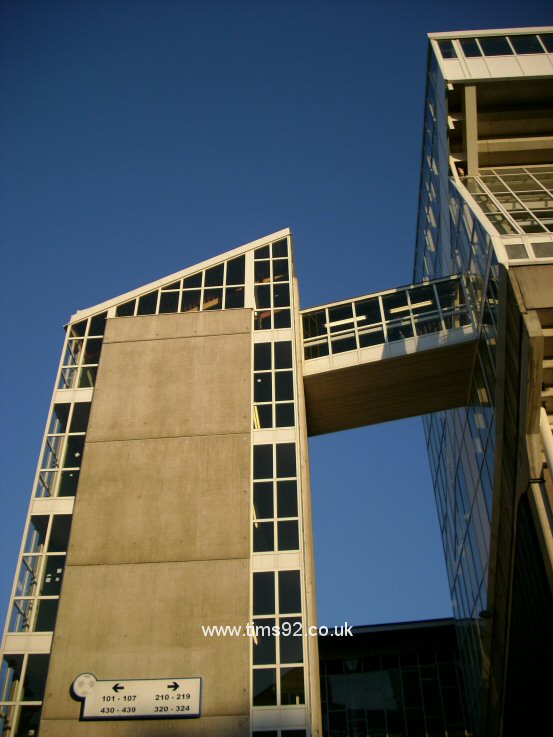 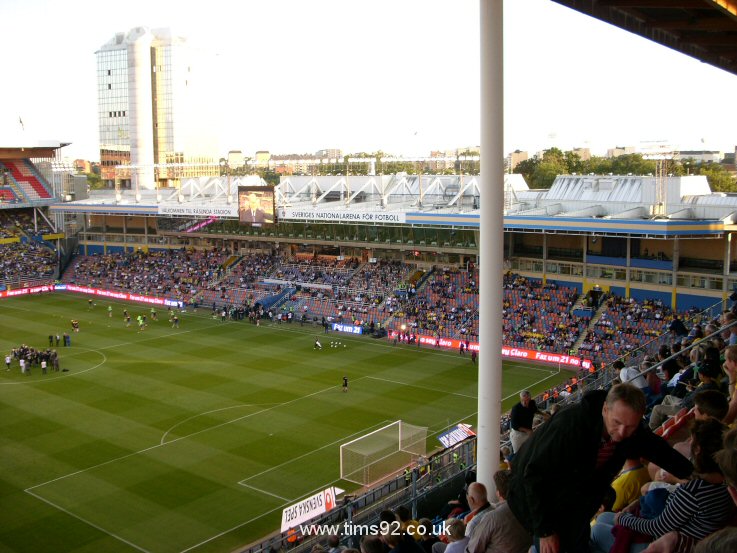 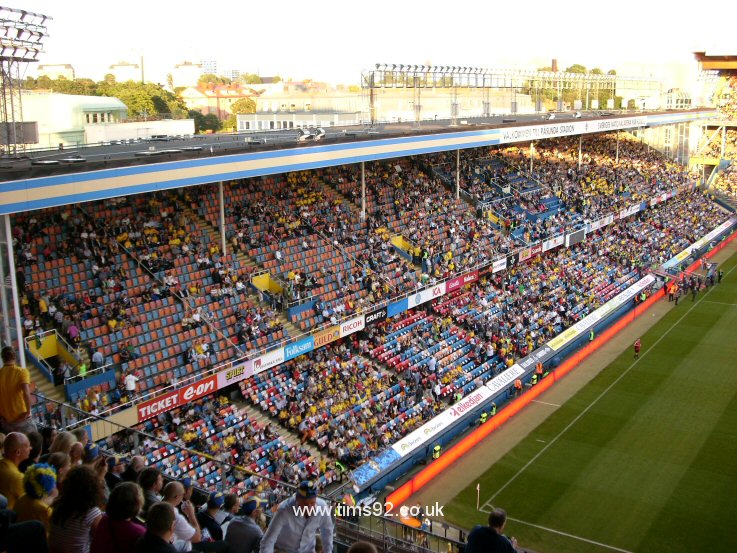 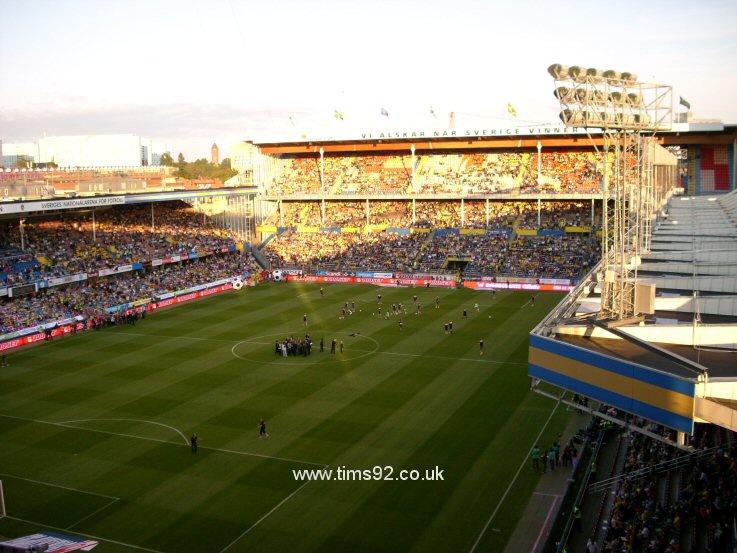 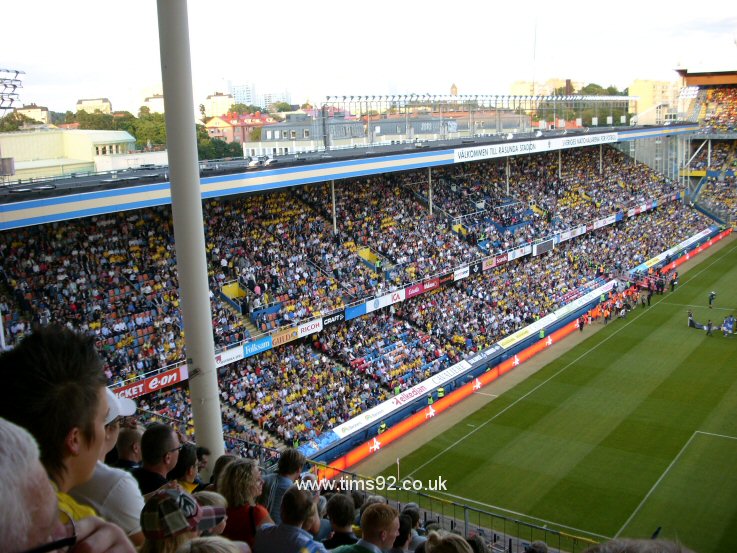 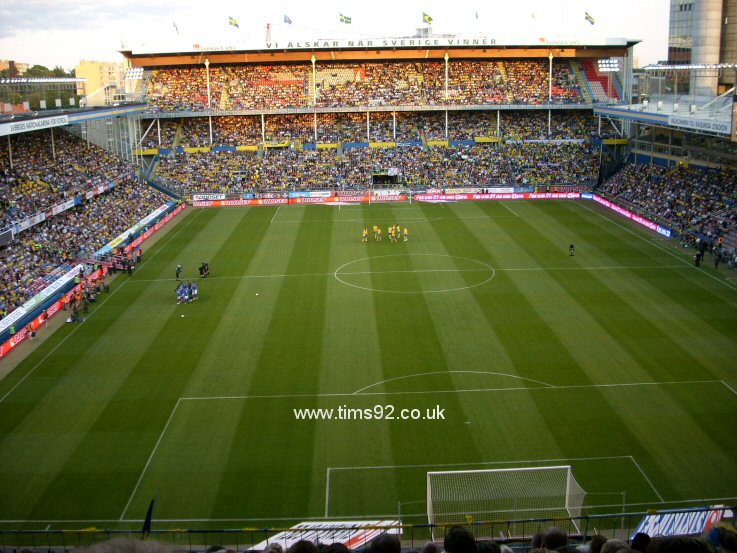 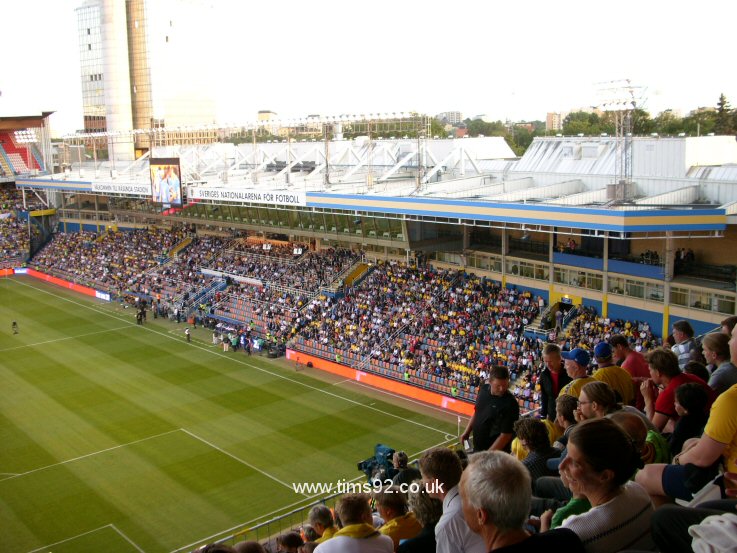 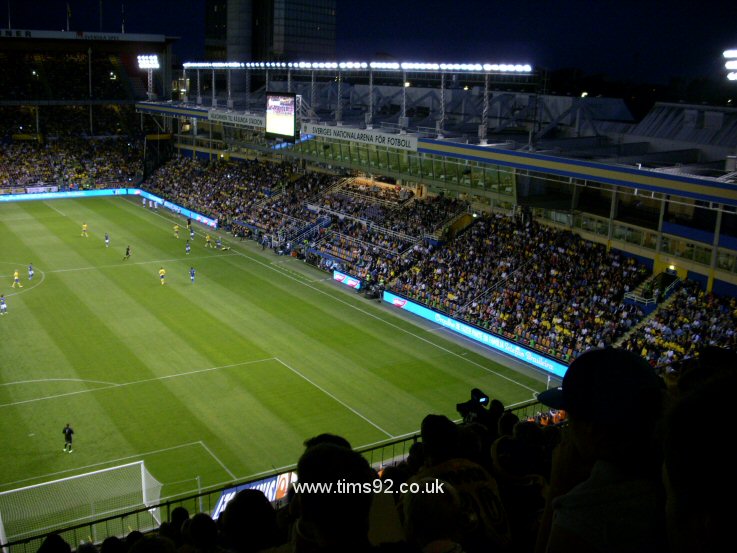 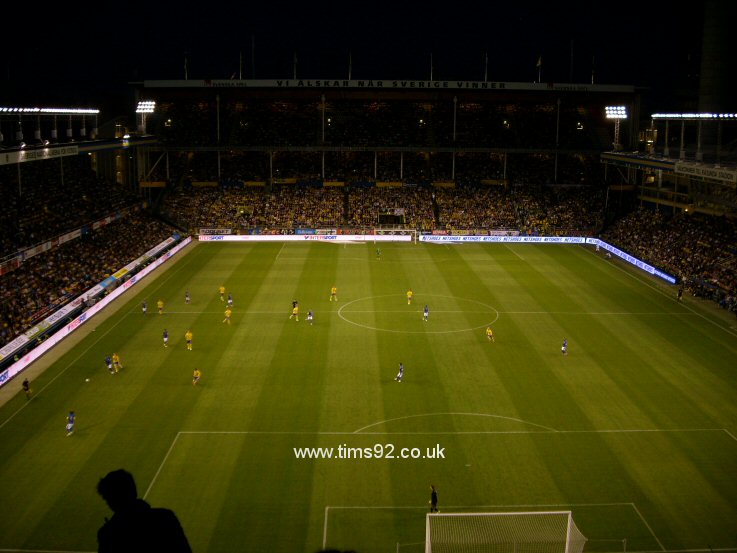 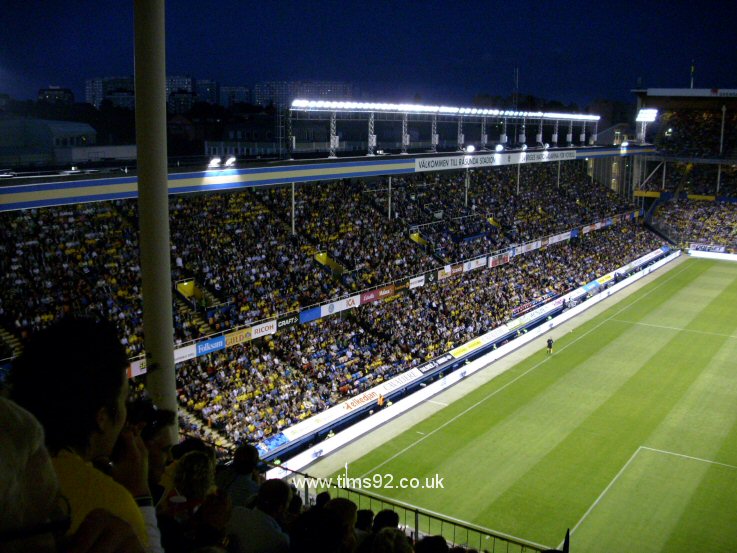 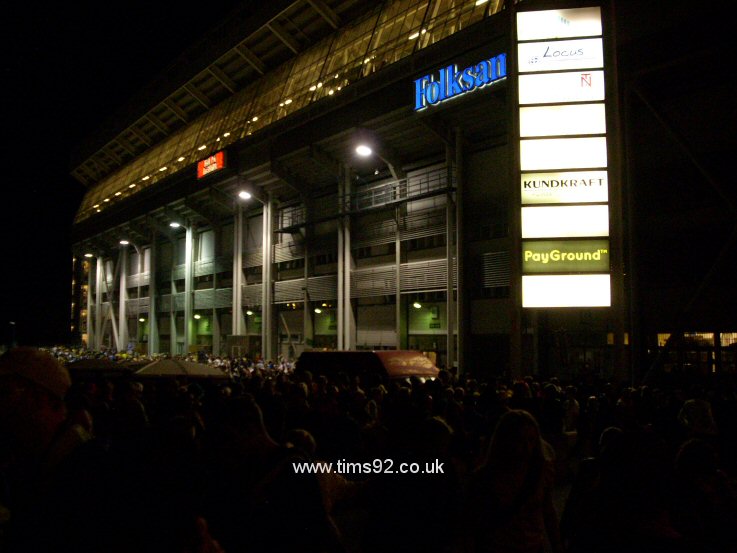